Over the next three years, choreographer Anna Konjetzky will be working on her project Nomadic Academy dealing with the subjects of alternative spaces, free spaces, alternative roads and  border(s) with a focus on evasion, displacement and resistance.

As a center that will be simultaneously educational, communicative and research-based, the Nomadic Academy will explore these topics under the keywords QUEER and QUER (QUER – a German term which means cross, transverse, diagonally), which will be the starting points for a practical and theoretical research journey; including a wide range of different people, groups and institutions – other artists, communities, students, theoreticians, universities… all testing, thinking
and challenging QUEER and QUER.

The Nomadic Academy will function as a base-satellite system and will thus connect the Bavarian dance scene (Munich base) to foreign dance scenes (satellites) from 2019 to 2021. The Nomadic Academy will take place every year in a different location abroad, and annually as a ten-day platform for knowledge exchange in Munich. It will dock into numerous institutions, collaborate with numerous artists, and lead to discourses, body practice and impulses.

The core of the Nomadic Academy consists of a crew of Munich-based artists, who will accompagny and activly shape the academy during the next three years. In various constellations participants of this reseach group will take part in the academy’s moduls abroad. Sharing there the previous research by focusing each time on the particularity of each of these places. Conversely an artist from the moduls abroad will also join the plattforms of the project in Munich, thus exchanging and challenging knowledge, discurse, aesthetics and body praxis of and in different local contexts.

The principle of the nomadic is at this juncture a constituting element for Konjetzky’s approach. It is illustrated, on the one hand, in the “wandering” of the academy – a practice that allows one to balance the issue of border(s) and alternative spaces with the respective conditions (political, social, geographic, etc.) and protagonists on site. On the other hand, the nomadic is also addressed in the organization of knowledge, in how we share knowledge, in what structures can we create during the academy to meet, interact, learn and research.

Considering human movement and (individual) freedom of movement is not possible without reflecting on border(s). Border(s) determine the space for movement and action; they elicit patterns of behavior and physicalness. Border(s) are celebrating a renaissance in our post-colonial, globalized and capitalist world and are drawn not only around nations but also exist increasingly within nations ans societys.

With various bodies at various locations, the Nomadic Academy would like to consider which borders affect, influence, limit and challenge bodies at the respective locations in diverse ways and thus politicize these bodies. The Nomadic Academy  does so in order to investigate what powers to act are inherent in movement and bodies. Can they transcend borders, move them, make them visible or even tear them down? These debates will always be addressed on two levels: on a physical, dance level (searching for physical tools, choreographic settings, giving physical experiences etc.) as well as on an intellectual level in discussions and lectures.

During this three years we will collaborate with three partnering countries:

The Nomadic Academy  will each time and in each country focus on the particularity of these places in collaboration with local artists, curators, initiatives and institutions. Thus continuing and expanding the research in order to establish a continuous discourse. 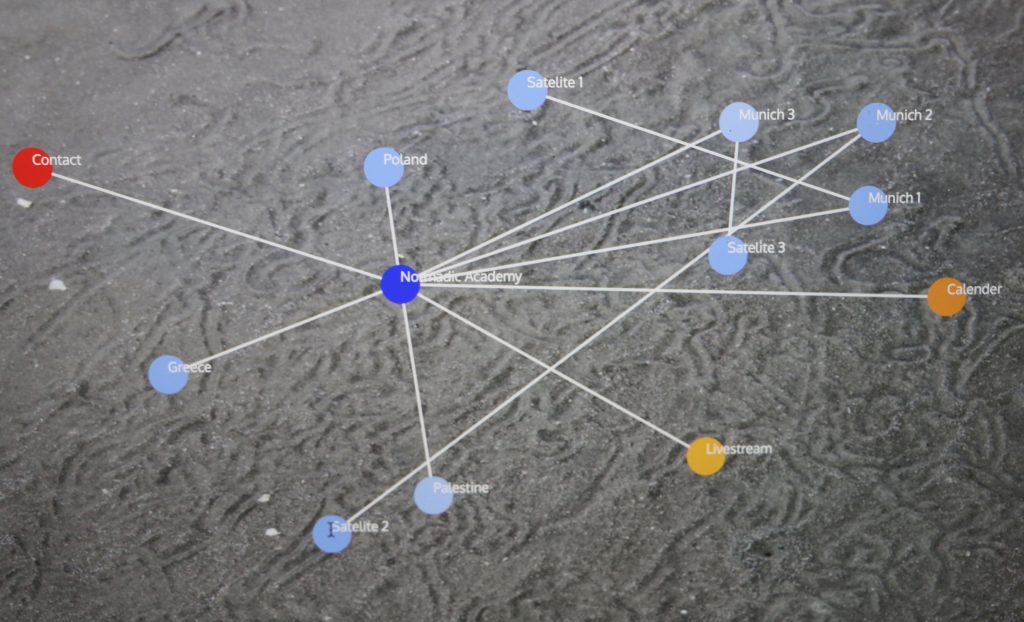 Funded by TANZPAKT Stadt-Land-Bund with the support of the German Federal Government Commissioner for Culture and the Media. With friendly support of the Department of Arts and Culture of the City of Munich.