A break into the colonial labyrinth

For audiences 12 years and older

In this immersive project, the interdisciplinary artist team Traummaschine Inc. takes up the discussion on Germany’s colonial heritage in connection with looted art. Following the model of popular Escape Rooms, the collective develops a fictitious criminal case in the rooms of the MARKK: a valuable exhibit has disappeared!
In this setting, the young audience must solve tasks to get behind the mystery of a missing sculpture, unravel its origin and history.
But who was it actually stolen from? Who does it really belong to?
With the exciting Escape Thriller, the project creates a playful approach to complex topics such as the sharing of cultural heritage and the healing of colonial trauma, which also includes the return of cultural assets. These tell of the manufacturing techniques, ideals of beauty and aesthetics of the countries and cultures of origin, but also of German colonial history.

Background
The so-called restitution debate, i.e. the question of how to deal with art objects from colonial contexts of injustice, is in full swing: in its coalition agreement of 2018, the German government committed itself to coming to terms with colonialism, and in 2022 the return of the Benin Bronzes was begun. But to whom should these go? To the government of Nigeria? To the state of Edo, where the Benin Kingdom is located today? Or to the Oba of Benin, the descendant of that king whose palace the British sacked in 1897?
The debate about the return of historical stolen goods is about questions of identity and ownership, about respect for property and international law.
With this project, Traummaschine Inc. aims to raise awareness of this discussion among a young audience. Should ownership be reversed and objects shown as loans from their countries of origin? Should collections be digitized and thus made accessible worldwide, and who should take on this task? Who decides what is appropriate handling?

Traummaschine Inc. uses the means of immersive theater and gamification, thus creating a hybrid theater and mediation format in which visitors are immersed in the discussion about looted art in contact with the performers. While cracking exciting puzzles, they learn more about historical stolen goods and have to apply newly learned knowledge and find their own attitude while solving tricky tasks.

Traummaschine Inc. is interested in the interactive mediation of social and political content. The Munich-North German group from the fields of performance, music, visual arts, fashion design and film seeks an approach to the audience that appeals on many levels. The story is only one of several narrative tools. Equally important are the music and the play with form and material, i.e. the acoustic and visual images that are created. TRAUMMASCHINE Inc. develops a narrative space for Die Beute, a detailed and playable parallel and experiential world. Through participation in the action, we create opportunities for the empowerment of children and young people.
In doing so, the artists want to animate the audience to enter into an aesthetic communication with their surroundings.

By and with: Traummaschine Inc., Gladys Mwachiti
Costumes: Katrin Rieber 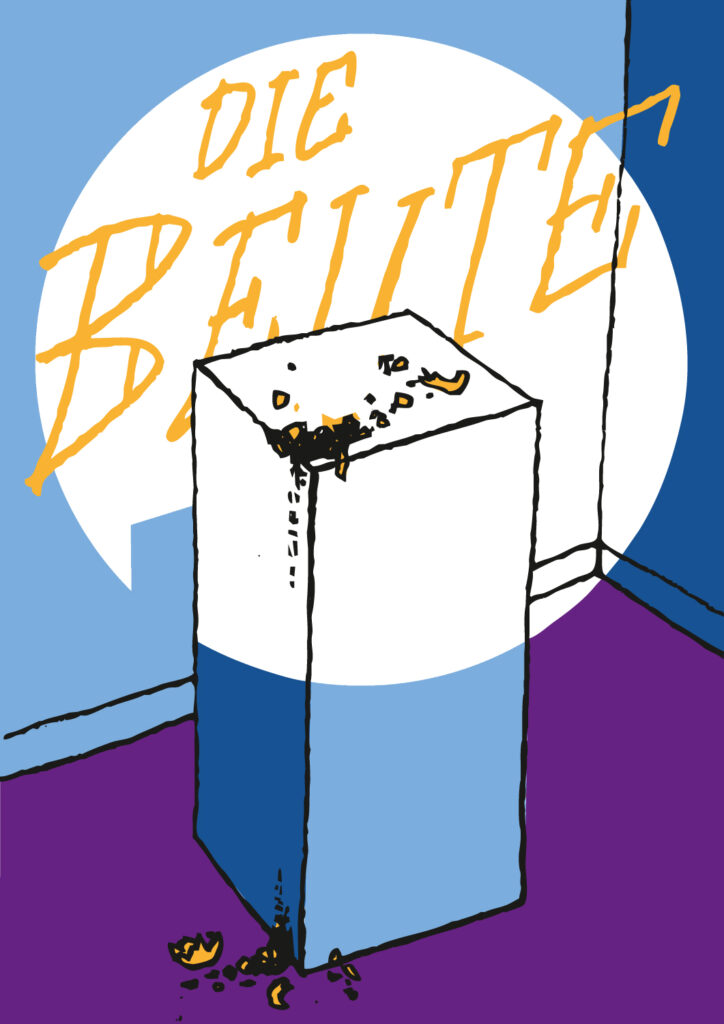 A production of Traummaschine Inc. Supported by the Landeshaupt München, Kulturreferat and by the Behörde für Kultur und Medien der Freien und Hansestadt Hamburg. Supported by Fonds Darstellende Künste with funds from the Federal Government Commissioner for Culture and the Media within the framework of NEUSTART KULTUR. In cooperation with Pathos Munich and MARKK Hamburg.